A couple of years ago, I sat down with my wife Bev to write a musical version of the Howard Hawks film His Girl Friday, which we knew to be in the public domain. A demo recording of the score followed. Everything was going great until I made a fateful phone call to a producer/friend of mine who immediately informed me that he handled the rights to the source material for His Girl Friday, which was The Front Page, and that it was most definitely not in the public domain. Months of discussions with lawyers and agents for deceased authors and uninterested estate representatives followed. All of this work revealed that my producer/friend was, in fact, correct. We halted work on the project and moved on to something else.

Now…years later…instead of letting these demo recordings languish on a hard drive, I thought it was a good idea to put them here on my website in the hopes that someone out there might hear them and get inspired to help us to, finally, acquire the rights and see this show realized.

What follows are the demo recordings of the fruits of Bev’s first songwriting labors, and a synopsis of the plot. I hope you enjoy it!

The offices of the Chicago Morning Post are bustling as everyone rushes to cover the red hot story of political corruption in the 1939 Chicago Mayoral race. The election is centered around the impending wrongful execution of Earl Williams, a down-on-his-luck bookkeeper who’s been on trial for killing a policeman (SONG: Opening – Gimme The Desk).

Hildy Johnson, star reporter for the paper and ex-wife of its editor, Walter Burns, turns up at her boss’s office to declare her retirement from the newspaper game and her impending marriage to insurance salesman Bruce Baldwin (SONG: I’m Through). After meeting Bruce (SONG: Puddin’ Pie), Walter determines to win Hildy back, as reporter and as his wife. He concocts a scheme to convince her to stay for just a few more hours and write “one last story” for the paper – an interview with Earl Williams that might save his life and flip the election, which is being won by a corrupt “tough on crime” politician. Hildy makes a deal with Walter: She’ll write the story if he purchases a fat life insurance policy from her fiancé. Walter agrees, and with much trepidation, Hildy goes to work on the article while Walter gets a physical examination and cuts a check to Bruce for the policy. Afterwards, Walter celebrates the genius of his scheme (SONG: Nowhere Without Me).

For the next few hours, Hildy builds an angle for her article, first talking to the other newsmen about the case (SONG: No Name Joe). Next, she interviews Earl in jail. He tells her his sincerest wish in life (SONG: Picture of the World).

While Hildy writes, Walter, who has no intention of going through with the deal he’s made with Hildy, starts doing everything he can to distract Bruce, even managing to get him thrown in jail for stealing a watch.

Earl Williams’ friend, Molly Malloy, visits the press room insisting the newsmen stop printing lies about her relationship with Earl. (SONG: Not A Good Bone Between You)

When Hildy catches onto what Walter is doing to her fiancé, she bails Bruce out of jail, tears up the story she’s written, grabs her hat and coat, and starts to leave (SONG: Goodbye, Hildy). Just then, all hell breaks loose in the county jail across the street. Gun fire and police sirens send all the newsmen out to investigate. The word is, Earl Williams has escaped during a psychological evaluation and is on the loose. With no reporter from the Morning Sun on the case, Hildy’s reporter instincts kick in and she jumps into action to chase down the story.

It’s bedlam in the Courthouse press room as reporters rush in and out, calling in their stories on the Earl Williams breakout. Eventually, Hildy gets the room to herself and calls Walter to give him the exclusive story, recounting every detail of Earl’s escape (SONG: Egelhoffer Jive). In order to get the story though, Hildy had to use Bruce’s Honeymoon money to bribe the prison guard. Walter tells her to keep writing and sends one of his henchmen to bail Bruce out and pay him back – with counterfeit money.

Meanwhile, Sheriff Peter B. Hartwell and the Mayor confer about their political prospects. They head a graft-ridden administration and need the execution of Earl Williams to deliver the law-and-order vote. When Joe Pettibone arrives with a reprieve for Williams from the Governor’s office, the Mayor and Sheriff offer Pettibone a bribe if he’ll disappear and keep quiet about Governor’s order (SONG: ?).

Back at the courthouse press room, Hildy, who’s been furiously writing, gets another call from Bruce. He’s been thrown in jail again, this time for “mashing.” Knowing Walter is to blame again, she angrily dials the post. But before Walter picks up, Earl Williams climbs in through the open window pointing a gun at her. He drops the gun almost immediately when Molly knocks on the door. Hildy lets Molly in and locks the door. She knows she won’t have the exclusive story if the other newsmen get wise. So she hides Earl in a roll-top desk, calls Walter, and tells him the news.

Walter comes over and convinces Hildy this is the story of a lifetime. If she stays and writes it, she could potentially put the corrupt politicians behind bars and be a big hero (SONG: This Is It). Forgetting about her fiancé, she goes to work at the typewriter once again. Walter clears the press room, including having his henchman physical remove Bruce’s mother who’s been searching frantically for her son. While Hildy writes, Bruce turns up demanding the money Walter owes hin. Walter pays him his $450, again with counterfeit money. Then Bruce gives Hildy an ultimatum: He and his mother are leaving for Albany on the 9 o’clock train, with or without her (SONG: Bruce’s Lament). Deep in writing, Hildy pays no attention. Bruce leaves.

Word has spread that Hildy and Walter are up to something in the press room. The Sheriff and all the newsmen gather and force their way in. Bruce’s mother returns, accusing Walter of trying to kidnap her, and saying she heard they have a dangerous criminal hiding in that very room. The Sheriff threatens Walter and Hildy, telling them they could get 10 years a piece if they’re harboring an escaped criminal on top of kidnapping. After a tense standoff, Earl is revealed in the roll top desk. The Mayor arrives to see a very satisfied Sheriff cuff Hildy and Walter. But before he can haul them off, Joe Pettibone returns, again with Earl’s reprieve, telling everyone that the Sheriff and Mayor tried to bribe him. The Sheriff releases Hildy and Walter, and he and the Mayor slink off with their tails between their legs to await the Morning Post’s story in the morning.

Left alone and triumphant, Walter advises Hildy to go after Bruce once and for all. She hesitates. She realizes she really is meant to be a reporter, but now he’s sending her away? She breaks down and cries after Bruce calls and tells her that he’s been arrested once again, this time for using counterfeit money. Defeated by Walters scheming, she knows she’s hooked. She sends bail money to Bruce while Walter calls his city editor to announce that he and Hildy are getting married again. (SONG: Baby, You Got What I Need)

The story ends with Walter and Hildy’s second wedding. 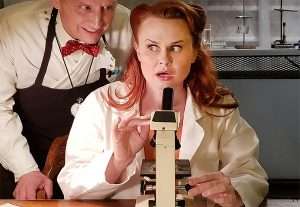